Free shipping on international order of $150+

In the last few years, Bunny’s Tattoos (aka Meg), has created success and happiness within her career industry. Starting out as a Tattoo Apprentice to becoming an Owner of her own tattoo studio called Dumb Lovers Studio.

We are so happy to have an interview with Bunny’s Tattoo, whilst she shares her personal discovery and journey towards her success as a tattooist. Striving for happiness was her main goal and with hard work, this was returned.

It was definitely eye-opening to see how opportunities can arise and how your passion can become your reality. Bunny’s Tattoo is definitely a success story for those who are willing to become a tattooist. But also for those who want to create a start-up and become self-employed.

1.Over the last year, Bunny’s Tattoos has grown massively and you must be so proud of your achievements! What inspired you to become a tattooist?

I really wanted to be able to be happy doing a job in something creative! But I never thought I’d be good enough to do tattooing as I assumed you had to do traditional or realism! I never thought my style of art would work!

I’ve always doodled and used a lot of colours in my illustrations so it was natural to me when I started bunny’s tattoos! Massively inspired by being happy.

2. At the beginning, you were a tattoo apprentice based in Bournemouth, what was the process like to become an apprentice?

I started hand poking from my lounge mostly with friends for practise! Then Instagram brought a following I never expected and wanted to find a studio to work from, I was lucky enough to have a small client base when I started at forever and ever in Bournemouth.

The process was a lot of drawing and making the perfect cup of tea sitting in and watching Jules and Dan tattooing for hours, and taking it all in. Watching and taking mental notes!

Then when it came to putting it into practise you kinda have to chuck yourself into the deep end after all that’s how you learn something quickly, although this wasn’t the case for me!

I didn’t get how a machine worked and the needle depth for a while, but when I did it was kind of like a light that turned on! Something that is now second nature to me; a bit like riding a bike, it’s something you’ll never forget.

My apprenticeship taught me so much, especially Jules who was a massive part to play with that! He’s such an incredible artist and to be around and learn from him I feel very lucky!

It’s what I’ve always been taught, and it’s what I live by. Leave a positive fingerprint on everyone you meet even if it’s someone behind the till in your local shop, someone on the tube you smile at, helping someone with their bags up the stairs, you get the idea! I’ve met a lot of people who don’t approach people with love and I just don’t understand it, give someone a hug tell them you love them. It costs nothing to be nice and it could change someone’s day. 💘

3. You worked at Vaporwave Tattoo in London, what’s the transition been like for you moving away from Bournemouth? And also working alongside talented female tattooists?

I knew that my time in London wasn’t over when I moved back at 23, so I knew London was the next step for Bunny’s! I was working in Soho when I first moved back up, then found Vaporwave in a dream studio with such talented artists.

The transition for me was so exciting and so inspiring I feel like I’ve really found something special in Vaporwave.

4. Your illustrations that you do create such an impact in a way that it gives out positive messages and empowerment, does your tattoos reflect this as well? 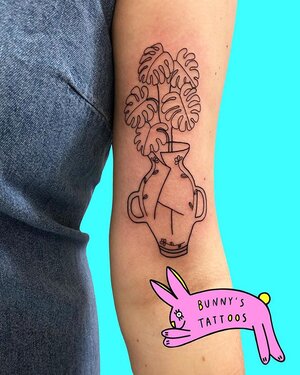 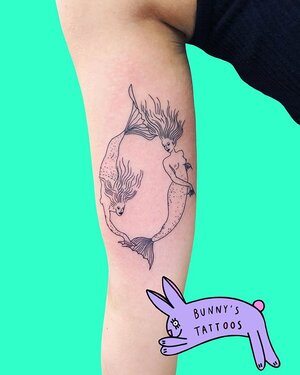 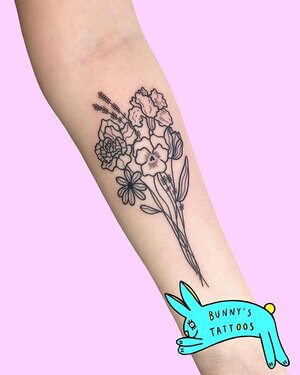 I tend to do a lot of custom work! Not all tattoos have a meaning for people, they just like the design and it’s about the way it makes them feel! Some on the other hand do have a meaning. I like to make sure that everyone I tattoo has a nice experience as getting tattooed can be scary!

5. Do you still do stick and poke tattoos? Could you explain the reasons why you chose this technique whilst being an apprentice?

I don’t do many hand poke anymore, mainly because I love using a machine! It was a different angle on your normal apprenticeship as nobody at the studio I worked with did it.

So, at the time of my apprenticeship it was a niche which is why I suppose I did so well. It was only a matter of time before I stopped doing hand poke because of the time it takes, with a machine I am able to do pieces a lot cleaner and quicker.

6. If you could choose a role model, who would it be and why?

Tough question! I wouldn’t necessarily pick one person, as I am inspired by many people in my life! Robin, my fiancé, is a massive driving force behind me. I am very lucky to have an amazing family and some really beautiful friends.

7. Within no time, you opened up your brand new tattoo studio, Dumb Lovers Studio. Was this a plan you had for a while? Or did it all happen quite rapidly? How was this transition from Vaporwave?

Dumb Lovers wasn’t planned at all, we’ve always spoken about opening our own studio one day but never thought it would ever be able to happen especially in London!

But an opportunity came up that was too good to pass up, even though I was loving my time at Vaporwave it was the next step in my career so me and Robin went for it.

When I told Jade (Owner of Vaporwave), she was so supportive and was on the same wavelength, as she had done the same thing and opened her own studio!

So, as it was sad to leave the girls at Vaporwave behind dumb lovers was a very exciting time for us. We have built the studio from nothing to now a full running tattoo studio with some very talented artists all under one roof.

8. As a tattoo artist, do you feel that this profession is becoming more competitive and accepting in today’s economic climate?

There are loads of people tattooing now! I don’t see it as a competition. It’s great that it’s become such a huge thing and that art is so accepted now.

9. Were there any challenges you faced in the past year and how did you overcome them?

Of course being self-employed can be really hard! There are always ups and downs but I’m very lucky I have my fiancé in my life for me when times do get tough.

The only challenge I’ve really faced is when I quit the cafe job I was working to going full time tattooing! That was the scariest thing, not knowing what was around the corner. But you just have to be strong and persevere with the belief that you will do well.

Feeling happy cheeky at all times.

10. Lastly, are there any future projects or plans for yourself or Bunny’s Tattoos or Dumb Lovers?

The next steps for Dumb Lovers really is only to enjoy working and tattooing learning from each other and creating some great art. Mainly being happy in the workplace and feeling happy to go into work! We wanted to create a space that welcomes anyone.

I definitely want to start doing merchandise, prints and maybe more exhibitions! Who knows! I know I always want Bunny’s Tattoos to be fun and relatable!

All sizes are Asian sizes so please check measurements and disregard sizes. Most of the time it is 2 sizes up from US/EU sizes.

This website uses cookies to improve your experience while you navigate through the website. Out of these cookies, the cookies that are categorized as necessary are stored on your browser as they are essential for the working of basic functionalities of the website. We also use third-party cookies that help us analyze and understand how you use this website. These cookies will be stored in your browser only with your consent. You also have the option to opt-out of these cookies. But opting out of some of these cookies may have an effect on your browsing experience.
Necessary Always Enabled
Necessary cookies are absolutely essential for the website to function properly. This category only includes cookies that ensures basic functionalities and security features of the website. These cookies do not store any personal information.
Non-necessary
Any cookies that may not be particularly necessary for the website to function and is used specifically to collect user personal data via analytics, ads, other embedded contents are termed as non-necessary cookies. It is mandatory to procure user consent prior to running these cookies on your website.
SAVE & ACCEPT